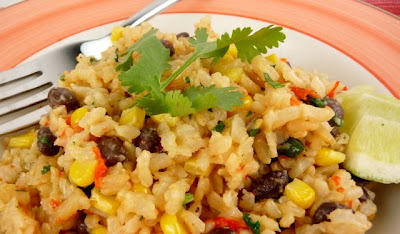 I was looking for some ways to use a bunch of cilantro I had on hand – and this recipe really appealed to me.  I definitely took awhile to cook because of the brown rice – but totally worth it in the end.   It was super flavorful and the corn provides a sweetness that really balances out the flavors.   It’s super healthy too – I spent the week before I made this out of town for work and after eating out every day for a week – this meal was almost like a detox from restaurant food.
Ingredients
Directions
1. Preheat the oven to 375° F.  Adjust an oven rack to the middle position.
2. Heat the oil in a large Dutch oven over medium heat until shimmering.  Add the onion and bell pepper to the pan and cook, stirring occasionally, until well browned and tender, about 12-14 minutes.  Stir in the garlic and cook just until fragrant, about 30 seconds.
3. Add the chicken broth and water to the pan.  Bring the mixture to a boil.  Remove the pot from the heat, stir in the rice and salt, and cover.
4. Bake in the oven until the rice is tender, 65-70 minutes.
5. Remove the pot from the oven and uncover.  Fluff the rice with a fork, stir in the beans and corn, and replace the lid.  Let stand for 5 minutes.  Mix in the cilantro and black pepper.  Serve.
Source: Annie’s Eats who adapted from The Way the Cookie Crumbles, originally from Cook’s Illustrated
Printer-friendly version
Posted by Christine at 7:53 AM