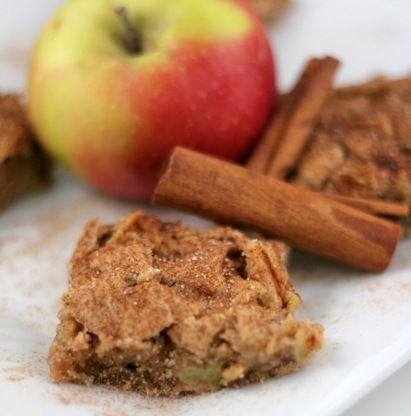 Although its very close to the official start of winter – for some people in Buffalo it has come full force (Luckily, we avoided the major storm that trapped people in their car for 20 hours).  These fall inspired treats will keep you satisfied all winter long.   They are super simple to whip together and the best part is the gooey apple inside and the way the top crisps up.  The hardest part is letting them cool so you can cut them and eat them right up!

3. In bowl of stand mixer fitted with the paddle attachment combine sugars and butter and beat on medium high until light and fluffy, about 1 minute.

4. Add eggs, one at a time, beating well to combine. Add vanilla extract and beat to combine.

5. Turn mixer on slow and fold in flour mixture a little at a time until just combined. Fold in apples.

7. Place in oven and bake until cooked through, when top slightly bounces back to the touch, about 30 minutes.

8. Remove from oven and let cool completely before removing from pan, cutting and serving. Bars will be very soft.