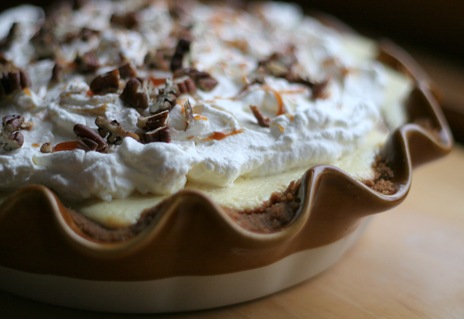 I’ve been dying to try this recipe since I first saw it!  It just has too much goodness packed into it not to try out – did you say – homemade caramel – apples, pecans, cheesecake and fresh whipped cream?  Ummm – yes please!     I also wanted to use my new pie dish – so I opted to make this in that instead of a cheesecake pan.  I think it worked out great.

I was a little nervous about the crust – since I used gluten-free graham crackers (so my Aunt with celiac could eat it).  But you would never know the difference – they tasted exactly the same as regular ones (although they did cost a small fortune for graham crackers!).

After the graham cracker crust is baked – you layer in some caramel and then chopped pecans…. 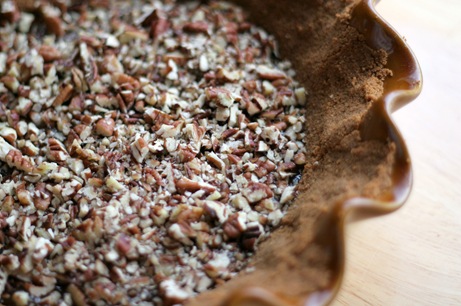 Then you layer in some cooked apple slices….. 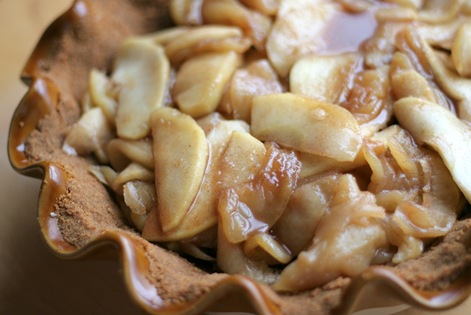 Next is a layer or cheesecake batter and once baked – topped with fresh whipped cream and garnished with pecans and caramel.

Are you drooling yet?   If so - go make this dessert! 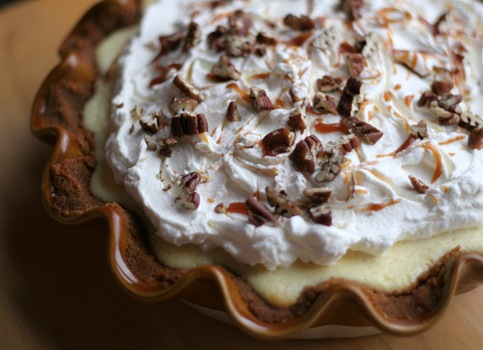 For the apple filling:

1. To make the caramel: Put the sugar, water and corn syrup in a medium heavy-bottomed saucepan and stir to combine.  Heat over medium-high heat, without stirring, until the caramel turns deep amber.  As the sugar is caramelizing wipe down any splatters on the sides of the pan with a pastry brush dipped in cold water.  Lower the heat and and add the cream and butter.  Once done bubbling – stir until smooth and remove the pan from the heat.   Cool and refrigerate until ready to use (can be made in advance).

3.  In a mixing bowl, combine the graham cracker crumbs, sugar, cinnamon and melted butter and combine until all the crumbs are moistened and the ingredients are evenly mixed.

4. Transfer the mixture to a 9 inch springform pan or deep dish pie plate and press the crumbs in an even layer over the pan bottom and up the sides of the pan.  Bake for 6-8 minutes, until golden in color.  Let cool for about 10 minutes.

5. Pour a layer of caramel into the bottom of the crust and sprinkle evenly with the chopped pecans.

6. To make the apple filling: Melt the butter in a large skillet over medium heat.  Mix in the brown sugar, salt and cinnamon and cook for 1 minute, until bubbling.  Mix in the apple slices and toss well to coat.  Cook over medium to medium-high heat until tender and most of the liquid has been reduced, about 15-20 minutes.  Let cool for a few minutes and pour into the prepared pie shell.  Set aside.

8. To make the cheesecake layer: Combine the cream cheese and sugar in the bowl of an electric mixer and beat on medium speed until smooth, about 1 minute.

9. Mix in the vanilla, egg and lemon juice until fully incorporated and smooth, 1-2 minutes.

10. Spread the cheesecake filling into an even layer over the top of the cooked apples in the crust.  Bake until a knife inserted in the center comes out clean, about 30 minutes.

11. Remove from the oven, transfer to a wire rack and let cool to room temperature.  Refrigerate for at least 4 hours.

12. In the bowl of an electric mixer fitted with the whisk attachment, beat the heavy cream and confectioners’ sugar on medium-high speed until stiff peaks form.  Spread gently over the top of the chilled cheesecake layer.  Top with dollops of caramel sauce and swirl with a knife to create a marbled effect.  Sprinkle with a handful of chopped pecans.

Source: Annie’s Eats, caramel from Baking from my Home to Yours by Dorie Greenspan