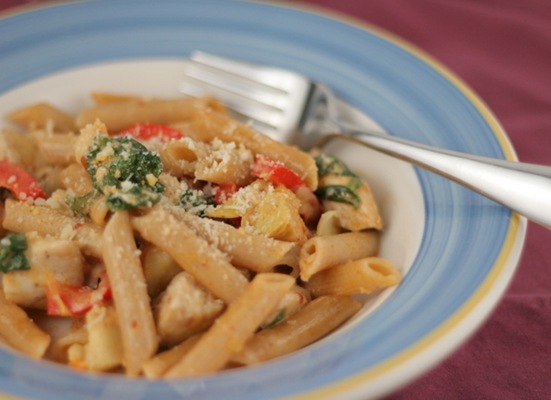 I’ve had this recipe saved in my ‘to-try’ list for a while – and I’m so glad I finally gave it a try.  It’s perfect for a quick weeknight meal.  Especially if you love chipotle peppers in adobo sauce – they really give the sauce a rich, smoky and spicy kick.  You can adjust the amount of heat – but be careful because these peppers can be pretty hot – this verged on being just hot enough – but any hotter and I wouldn’t have been able to eat it.   Even how it is, it cleared out my sinuses really well.   Enjoy!

1. Cook the pasta according to package directions until al dente. Set aside.

2. Season the chicken with the salt and pepper.

3. Heat oil over medium heat in a large skillet.  Cook the chicken until it starts to brown – about 2-3 minutes each side. Remove with a slotted spoon and set aside on a plate.

4. To the pan, saute the red pepper until soft, about 5 minutes.  Add in garlic and cook for about 30 seconds more.

5. Add in the artichoke hearts, chipotle pepper and adobo sauce, then stir in the chicken broth.   Bring to a simmer.

6. Return the chicken to the pan and continue to cook until heated though.

Posted by Christine at 7:30 AM