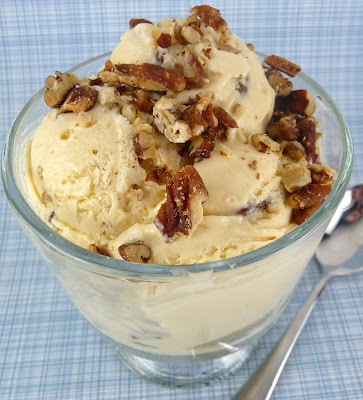 Another homemade ice cream, another amazing recipe from The Perfect Scoop (if you are going to make your own ice cream - just buy this book and you'll be all set).  I was trying to use up some leftover egg yolks from making swiss-meringue buttercream from these cupcakes and ice cream is my favorite way to do just that.  And let me tell you - this recipe did not disappoint.
The only issue I had was that I only had Bourbon whiskey and not Scotch whiskey, as called for in the recipe - I really have no idea how different they taste - but after some googling - I decided to just use the bourbon.  So if you have Scotch - make this with that and you can call this 'butterscotch pecan ice cream'.

for the buttered pecans (make up to 2 days in advance)


1. Pre-heat the oven to 350 degrees. Melt the butter and then toss the pecans in the butter and salt to coat. Spread evenly on a baking sheet and toast for 10 minutes giving one stir during baking.

for the ice cream


1. Melt the butter in a medium saucepan then add the sugar and salt and mix until well moistened.
2. Whisk in the 1 cup of the cream and the milk.


3. Warm the sugar and cream mixture and pour the remaining 1 cup cream into a large bowl with a mesh strainer set on top.

3. In a separate bowl whisk together the yolks, then slowly pour the warmed cream mixture into the eggs whisking all the time to temper the yolks but avoid scrambling them. Scape this mixture back into the saucepan.

4. Stir this mixture constantly over medium heat with a heatproof spatula stirring until the mixture thickens and coats the back of the spatula (until it reaches 170 degrees).

5. Pour the custard through the strainer into the cream and stir in the vanilla and scotch/bourbon then stir until cool in an ice bath.
6. Chill this mixture thoroughly and then freeze in your ice cream make according to its instructions. Add the buttered pecans during the last few minutes of churning.

Posted by Christine at 8:12 PM